The Detritus on the Floor

Detritus is an interesting word. First, I just found out that it's spelled "detritus" with a second T, not "detrius" without a second T. And second, some people claim to pronounce it with a long "e" as in "dee" and a long "i" as in "try." Others leave the vowels short and even leave out the second T in the pronunciation. Plus, it seems to be mostly used in biology or medical jargon, as in "the detritus of the dead bird in the garden is fertilizing the plants."

And because I'm a nerd, I looked it up some more and found out Detritus is also a video game much like Asteroids, a troll in Terry Pratchett's Discworld series, and some kind of electro-aggro-industrial band. Now you know.

But for my purposes here, I'm referring to the physical debris that erodes away from our lives consistently, all day long. More specifically, the crumbs of food and bits of trash that end up on the floor of my house is driving me batty.

We have hardwood floors in our house. Before we moved in, we had the floor completely refinished, and it's held up beautifully. We've since refurbished the kitchen and bathrooms and included new tile floors in each room. I love the look of my floors. But hardwood and tile flooring can cause a unique set of problems in a home. Small things too easily roll under the couch. You can't comfortably take a Sunday afternoon nap on the floor. And the floors can get cold. Even in the middle of summer, I sometimes find myself needing slippers. Worst of all, clean-up is a never-ending story.

( I couldn't resist. Enjoy the cheesy goodness of Limahl. Plus, notice how the drummer figured out you don't need drumsticks to play those hexagonal toy synthesizer drums years before Rock Band was ever a thing.)

It's kind of revolting to think about the particles of dirt and dust and skin and food and insects and mites that live long, full lives within carpeted flooring. Every once in a while, a vacuum collects the bigger pieces, but that's all okay because, really, you hardly notice the detritus. On a hardwood floor, as I'm learning, all you notice is the detritus. Dust bunnies float around with the currents created by the ceiling fans. Crusts of bread are kicked around until they're either reduced to minuscule crumbs or just scooted under the furniture. Drops of milk from a sippy cup accumulate dirt until they become black, sticky masses.

I've lived in this house for the better part of a decade, and I've lived with hardwood floors before that. So why now? What about the grit on the floor is getting to me now when it didn't bother me before? The answer is simple. It begins with an X and ends with The Boy. 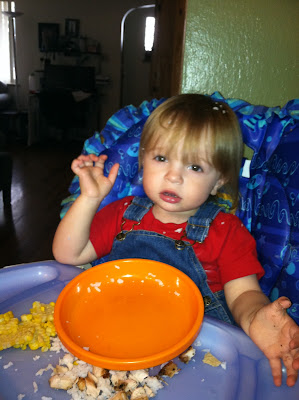 The worst of it naturally builds up around the high chair. Xander's eating habits go something like this: Yum-yum, nibble-nibble, squish-squish, chew, swallow, throw. He knows how to say "Done." He knows how to say "Down." They're pretty much the same word to him. But does he tell us he's finished eating and would like to get out of his high chair now, please and thank you? No. He drops his sippy cup, upends his plate, throws to the floor any food he can grasp, and brushes the crumbs off of his tray with a quick sweep of his hands. This inevitably leaves more food on the floor than ended up in his tummy, thus creating the detritus that I must step through to get to the kitchen from the dining room. 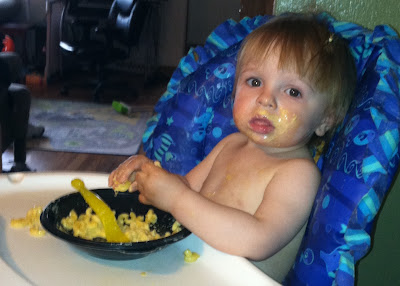 And, somehow, the rest of the house is affected. The living room rug gets Cheerios ground into it. The bathroom hallway has sticky spots. Various corners of our home boast fruit snacks to feed the spiders. This is all in addition to the variety of cars and crayons and balls and bits of toilet paper we all must make a path through.

Really, the worst is what I feel on the soles of my feet. If we had carpet, I wouldn't notice when a piece of hardened cheese or even a mushed apple stuck to my heel. I would just swipe my foot along the rug if I noticed anything at all and, poof, the detritus would be gone, hidden at least until the next pass of the vacuum.

We didn't used to have to, but we sweep every day now. Usually more than once. And the mopping, which is more of a wet-wipe spot-cleaning than anything else. Yet the detritus is unconstrained. We try to control Xander's movements during meals, but the banana still ends up under the table, the Cheerios still end up everywhere. Only to be carried to the far reaches of the domicile, all adding up to become the detritus of our lives.
Posted by Brent Wescott at 5:00 AM

Email ThisBlogThis!Share to TwitterShare to FacebookShare to Pinterest
File under: fatherhood