The Christmas Tree and Other Irritations

So, mostly I just gush about the boy all the time around here.

But I'm noticing our Christmas tree over in the corner and it's looking sad. In the past, dozens of different kinds of ornaments have adorned its branches. We don't follow any certain style; over the years, we've collected a variety of flavors. Some fancy crystal, some homemade felt. Some green and red balls, some tourist souvenirs. But place them all overlapping the festive blinking lights, fill the room with more eclectic tastes of the season, and the tree appears downright elegant. 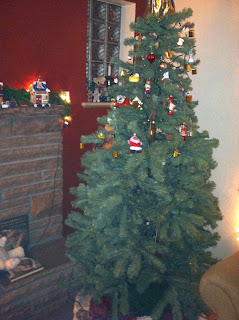 That looks even worse than in real life. Here. It looks slightly better with the lights on, but you can't really tell how the ornaments are distributed. It's just such a mess, I'm embarrassed to even post these pictures. 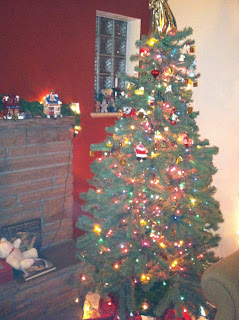 Any guesses why it looks this way?

Generally, Xander's pretty great. But the fact that he's turned our Christmas tree into this mockery of a Christmas tree is distressing. I understand I shouldn't expect much else. He's a precocious toddler with nothing else to do but run amok throughout the house. But he's broken at least four of the ornaments and I've punctured my foot on an ornament hook when he generously distributed a bunch around the floor. It hurt.

So I'm in a mood to discuss a few other annoying aspects of the toddler and his ways.

I wear glasses. Always have. My wife, too. If you're blessed with infallible eyes, I won't be able to explain in words the importance of fitting a pair of spectacles so well that you forget they're on your face. Seriously, when that child doesn't want to be held and he reaches up to grab your glasses when he knows how much it infuriates you...I can't even end that sentence. But once he has the temple in his little vice grip, you can't just move your head or he'll snap the little plastic piece in two. You can't reach up to stop him; your hands are full and busy holding on to his wiggles and squirms. He knows very well he has the advantage. You just have to let it happen. He takes the glasses off your head, and depending on his own level of frustration, might send them flying across the room or restaurant or holds them away from you, smiling broadly, a game of keep away at full tilt.

The whole issue is aggravated when he accidentally smacks his face or foot or something else into your glasses. Right there on the corner of the frame where the joints are so precariously fitted, so perfectly formed that the glasses stay comfortably on your nose without slipping, without pinching your ears. And when you collect them and put them back on, the chances of them being slightly askew, which means infinitely maddening, are so high that you almost just want to throw them in the trash and start over at America's Best in the morning. Of course, how would you get there if you couldn't see?

And you already know my feelings about the detritus that gathers on our hardwood floors. As the boy gets older and has graduated from a high chair to a booster seat at the kitchen table, the detritus has only gotten worse. He's still strapped down because if he weren't he would hardly eat anything before slipping under the table and running away with a curt "bye-bye" and a wave. So when he's through eating what's on his plate, he simply grabs it and dumps the remaining contents on the floor. It happens so quickly, no amount of watchful hovering can stop it. There is no defense. The food ends up on the floor, and whatever is left on the table is then brushed off with his hands, quick like a bunny, because he's anything if not courteous enough to clear his entire place from the dinner table.

He knows how to say "I'm done," or at least "Down." But he doesn't. Then he runs off and leaves the sweeping to Daddy.

"Xander, do you want some cookies for dinner?" "No."

"Do you want to wear your monster jammies or your monkey jammies?" "No."

Email ThisBlogThis!Share to TwitterShare to FacebookShare to Pinterest
File under: fatherhood

I don't know where my son is right now.

I'm pretty sure he's in his room. I'd have heard the door open if he'd escaped. But exactly where he is in that room? That's a mystery. I could check. A good inch-wide gap separates his bedroom door from the floor, the result of wall-to-wall carpeting however long ago. These days we go with naked hardwood. If I lie on the floor a little ways down the hall, I can get something of a view inside the room. But right now, I think all I'd see is blankets piled on the floor, tossed off the bed.

Not long ago, a monkey foot wrapped in footie pajamas forced its way under the door in an effort to escape the confines of the room then got stuck there. I had no choice but to open the door and replace the monkey boy back into his big boy bed.

A couple of days ago, the boy was committing some random terrorism around the house and ended up in time out. His mother and I put him in his crib while we went to clean up whatever mess he had made. We returned not more than 30 seconds later and entered his room to find him smiling proudly, lounging in the armchair we'd put in there a few days ago while he was up all night coughing his lungs out and not sleeping much. The plushy armchair is more comfortable for a parent sitting up with a sick child, but apparently we'd left it too close to the crib because he'd figured out he could use it to his advantage and stage a prison break.

It was a watershed moment.

I removed the chair, all the while knowing any day now the boy would discover another way out of the crib. After all, a handy rocking chair had sat next to his crib for two years now. It was a much shorter drop than to the floor.

Then today at 1:59 p.m., I received a text from my wife declaring the following:

Put Xan in his crib for a nap. A few minutes later he opened the door and ran out to give me a hug. Huge grin on his face. Guess what we're doing tonight?


I laughed out loud. When I got home the first thing the boy did was show me how he could climb out of his crib by balancing precariously over the corner and dropping kind of sideways onto the rocking chair. Easy peasy. How proud he was.

So we turned the crib into a big boy bed. Four walls no more, the cage is gone, replaced by a guard rail that's supposed to keep the child from rolling onto the floor, but which facilitates an easy climb in and out of bed.

"Are you ready for what's going to happen tonight?" I asked my wife when the bed was complete again.

"No," she answered, but didn't offer any words of wisdom. Please refer to the Great Sleep Debate of 2012 to remind yourself of what we went through to get the boy to go down and sleep all night in the first place. Now I was worried the debate was about to start up all anew.

Bedtime rolled around tonight. Mommy conveniently found a way to leave the house. I read him a few books, watched some of an episode of The Last Airbender until he was sleepy, then put him down in his new big boy bed. He curled up in his blanky like he does, turned over, and seemed to get right to sleep. We've trained him well, I thought. Mom will come home and be so impressed. No debate necessary.

Is this so terrible? With my oldest daughter, we strapped her into her bed until she would request it before we left the room at night. Otherwise she never would have stayed in bed long enough to fall asleep. But her mother and I hadn't trained her like we've trained the boy, so I figure only a few nights of blockade will be necessary for him to learn that sleep happens in bed, not on the floor at the door breathing the radiance creeping in from whatever party Mommy and Daddy have going for the rest of the night.

So, after sticking one foot under the door, emptying out several of his dresser drawers, crying the dark because he'd turned off his own nightlight, sitting with Mommy after all because she came home and couldn't stand him crying in the dark, he has chosen this: